Note: This pre-RFC was presented at the September TVM Community Meeting (check out the video here). Looking forward to gathering more community feedback!

This RFC proposes to add product roadmaps to TVM.

Roadmaps should be seen as a way of unifying the planning process of TVM, all the way from ideas to PR merges. The roadmaps discussed in this pre-RFC are intentionally designed to integrate with TVM’s existing planning tools (e.g. Github tracking issues, RFCs), while adding an additional space for sharing and collaboration earlier in the R&D process.

This guide-level explanation will describe the basic structure of the roadmap, without focusing heavily on the intended contents.

The roadmap utilizes Github Projects as the underlying tooling mechanism. This maximizes reuse of existing content tracked in Github, and is very user-friendly for existing Github users. 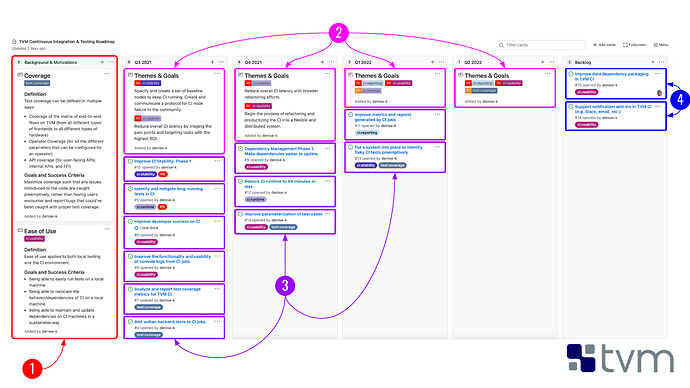 Above is a sample roadmap for TVM CI and Testing, with annotations to show several important features within the roadmap:

There were several key considerations made while designing this roadmap, centering around the overall themes of quality content, usability, and maintainability. Below are some of these considerations:

Below is the initial set of roadmaps proposed in this RFC.

There are a few challenges to having publicly available roadmaps, but overall, we believe that the benefits of having roadmaps for TVM vastly outweigh the negatives.

There are several alternatives to this roadmap proposal; however, each of the alternatives has drawbacks of its own.

This RFC is inspired by the previous work done to improve the tracking mechanisms of TVM. This includes but is not limited to the existing RFC process, release process, and technical visions of TVM. 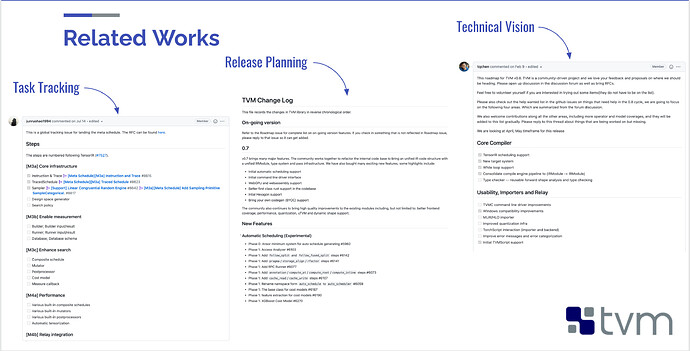 It is also inspired by the public Github roadmap, which is an excellent example of usage for Github Projects. 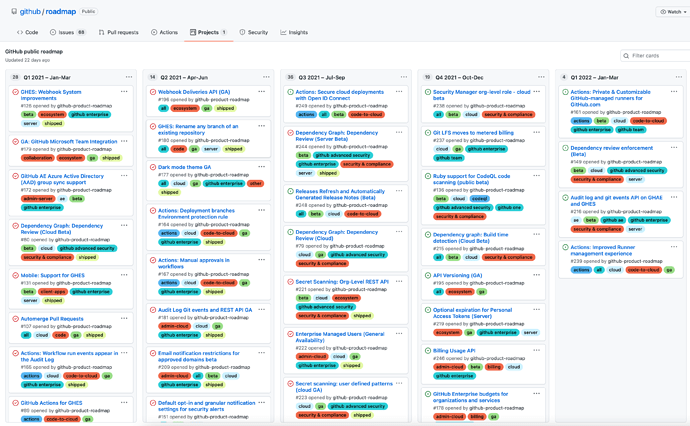 This is a prospective upstreaming timeline for the TVM roadmap.

Questions about the design and contents of the TVM Roadmap will be progressively resolved through the upstreaming timeline shown above. Any unresolved questions at the end of TVM Roadmap Milestone 1 will be created as roadmap items in the TVM Community Roadmap

thanks @denise-k for your proposal! Since I helped with editing the proposal here I of course think it’s a great starting point. We would love to hear more feedback from the community, other committers, and PMC!

In particular for microTVM I would propose we move away from the periodic M Roadmap threads and onto something like this, which provides more frequent updates and continuity.

This is a fantastic move in our TVM community. Super excited!

As a distributed community, I would say different developers from different companies/universities/etc may like to collaboratively working on items in the roadmap, or adding projects to it. Therefore, the community roadmap guidelines would be really helpful to make the process really smooth. Looking forward to it!

Yes! Absolutely agree that we should make the roadmap a collaborative process

Looking forward to releasing documentation outlining this in M1B.

Thank you @denise for steering our community towards having a clearer roadmap. Looking forward to seeing this collaborative process flourish and obtaining input and suggestions from the rest of the community!

Overall would love to move to a larger and more encompassing roadmap so we can communicate across companies, universities and individuals what we are working on and the general status.