The Apache TVM project relies on Jenkins for Continuous Integration services. At present, Jenkins is maintained by a small set of folks, many of whom are core committers or who serve on the PMC. As the project grows and the maintenance burden increases, we find that it could be beneficial to the project as well as the current Jenkins maintainers to adopt a more modern, Infrastructure-as-Code approach to maintaining the fleet of machines and the web services responsible for the TVM CI. 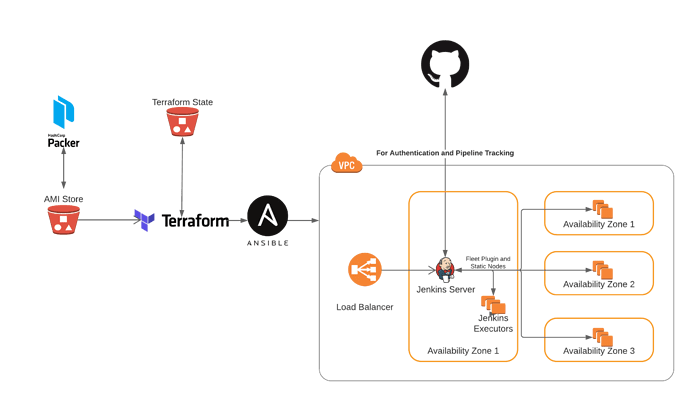 At a high level, the proposed architecture layout is similar to what currently exists for TVM CI; namely, a leader VM in AWS will run the Jenkins GUI and assign pipeline jobs to agent VM’s. As before, the Jenkins service on the leader VM will run via docker, and the leader will assign jobs to the agents via SSH authentication. While there will certainly be some architectural difference between this setup and the old one—agents will likely be deployed in autoscaling groups, and they will likely utilize a shared cache mechanism for builds via EFS or S3—the primary differences involve how provisioning/configuration is done:

It will likely be the case that the Terraform and Ansible code will reside in different repositories, as they will likely utilize different deploy paradigms. The former will likely leverage Atlantis pull request automation, which essentially allows contributors to run and review terraform plans by issuing comments on a PR. On the other hand, the ansible playbooks used to configure Jenkins will be run using Github Actions. If it is desirable to reduce complexity, we could use the same deploy tool for both.

Under normal conditions, the system operates as follows:

Jenkins executor nodes can be classified into two groups:

At launch time, we intend to use only static nodes. However, autoscaled nodes have been tested internally and we will begin to use those sometime in Q1 2022. Autoscaled nodes present a debugging challenge, as flaky tests or non-repeatable errors will need to be diagnosed before the autoscaled node is decommissioned automatically by the Jenkins master.

The production TVM CI instance will be managed using an open source Infrastructure-as-Code repository living in GitLab. GitLab is preferable for DevOps workflows due to a slightly nicer pipelines system, particularly one which allows for manual intervention if needed. All configuration except credentials will be stored in this repository. TVM Committers, plus additional delegates of those committers responsible for running the TVM Jenkins infrastructure, will be granted write access to this repository. Any changes to this repository will require review from those individuals with write access who are actively involved in the day-to-day operations of TVM CI.

This section describes the various maintenance tasks that may need to occur with a Managed Jenkins fleet and roughly outlines the strategy and playbook for accomplishing them. The actual playbooks will be maintained and updated in the Infrastructure-as-Code repository which automates this system.

As mentioned in the Architectural Overview above, the Jenkins service on the head node runs via docker, and the image is deployed via Ansible. Updating the Jenkins service is therefore as easy as updating the version tag on the Jenkins image and letting the Ansible pipeline deploy the new image onto the leader node. Since doing this involves restarting Jenkins, it causes running jobs to fail; to prevent disruption, worker nodes will be drained of jobs prior to deployment. This will all be done in a pre-defined maintenance window (e.g., Sunday night) as to avoid large queue times during the draining process.

Changing the set of static nodes

As of now, technical limitations in the way the static nodes are deployed prevents configuration changes without recreating the nodes. Luckily, these changes can be applied by rolling updates; namely, the nodes can be drained and updated one at a time to avoid noticeable CI degradation. To elaborate, the update process entails making a change to the set of static nodes in Terraform and then draining and applying the changes on each node one by one.

Making a configuration change to Jenkins

Jenkins Jobs are also managed through Ansible, and updates to job configuration/adding new jobs does not require Jenkins to be restarted.

This section describes how we have validated the new CI to ensure we aren’t changing the test results by switching platforms. This validation process is vastly simplified by the fact that we have already been managing the executors using Terraform for 6 months. Here, validation means determining that the proposed Jenkins system produces test results which are similar enough to the one currently running in production.

There are many reasons why the two systems could differ:

We consider disagreements in test results caused by the first two reasons to be blocking, and the others to not block a launch of this system. TVM’s CI testing is not always 100% reproducible due to test flakiness, and the benefit of launching this system outweighs the cost of achieving an exact match between a staging system and TVM’s present production CI system.

TVM CI is less heavily used over weekends, so the launch process will take place on a weekend. When the launch commences, Jenkins will be configured to stop scanning PRs and we will wait for builds to complete. Once completed, the following steps will take place:

We will not initially enable autoscaling. After a few weeks of successful operation, we will begin adding autoscaler nodes to the fleet.

We propose that the Infrastructure-as-Code repository for this system be open-sourced but that the maintenance be delegated to OctoML’s infrastructure team and community members selected by the PMC. IaC operations will be launched in practice from GitHub Actions inside a new e.g. tlcpack/ci-* repositories. OctoML engineers will provide cloud credentials to the repository (stored privately, accessible to those involved with CI operations) to enable access to the fleet of nodes sponsored by OctoML.

We considered using GitHub Actions to drive the TVM CI instead of Jenkins. While GitHub Actions has several attractive properties (for two, a modern configuration language and management of the “Jenkins master” equivalent), there are a couple of compelling reasons to build our own infrastructure including the Jenkins master:

Will follow up with a more detailed response after TVMcon, but overall I am highly supportive of doing this and believe it will make it easier for multiple organizations to collectively modify the CI infrastructure as the project continues to grow.

This will be a great improvement to opening up the CI and making it easier to maintain / scale!

TVM CI is less heavily used over weekends, so the launch process will take place on a weekend. When the launch commences, Jenkins will be configured to stop scanning PRs and we will wait for builds to complete. Once completed, the following steps will take place:

What about a slow roll out to reduce the potential of any disruption? i.e. We could at any time spin up the new Jenkins (and maybe put it at ci-beta.tlcpack.ai) and have GitHub trigger jobs for main/PRs on both instances. If possible the new Jenkins could skip reporting status back to GitHub at first until we’re sure it has some measure of reliability. After some validation period of running both in parallel, we could disable the old one and swap the new one over to ci.tlcpack.ai.

@driazati ah thanks for flagging this. We have been running our staging instance against apache/tvm for about a month or so already. The repository linked above contains a mirror of the IaC code which configures our internal instance.

We still have a bit more validation work left to complete, but we are nearly finished and will be ready to launch this likely early in Jan given the holidays. The Launch Process above reflects that final “disable existing prod and swap” piece of the strategy.

Status update: the new Jenkins setup is now deployed and operational. Furthermore, I’ve tied up some loose ends with the configuration in https://github.com/tlc-pack/ci/pull/1. I’ll likely be making other similar QoL improvements to the code in the coming weeks, of which I’ll be sure to keep everyone posted.